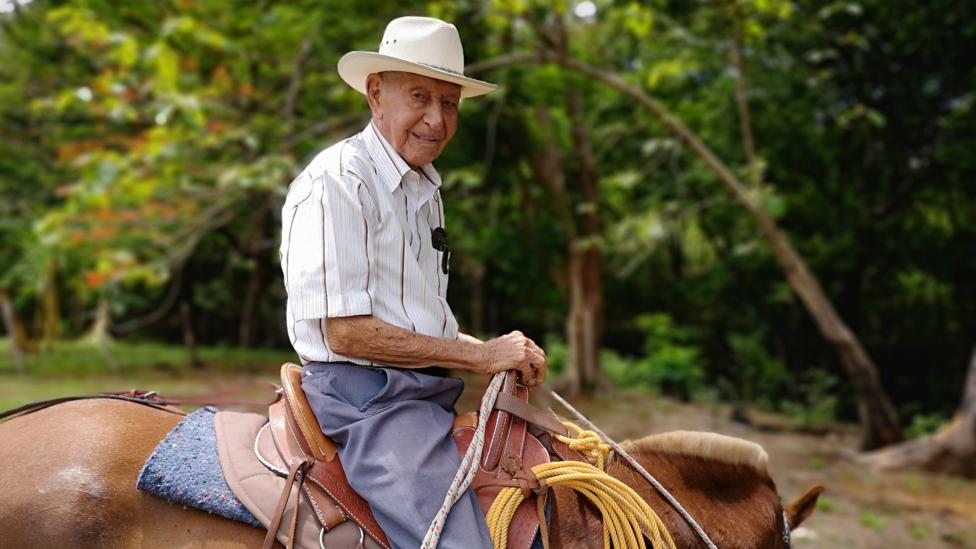 By Alexander Villegas 30th April 2020
Some of the world’s longest-living people aren’t doing anything special to live to 100 – but that may be exactly what’s keeping them alive.

José Bonafacio Villegas has ridden a horse nearly every day for the last 100 years. Villegas learned how to ride in 1921, and spent the next 99 years riding to school, doing farm work or visiting friends on horseback. At 102, riding is still his passion, although he’s currently sidelined – an ear infection hurt his balance and has kept him off the saddle since December.

It’s a temporary setback, says Villegas. He hopes he’ll be back on his horse soon. “Hope keeps you going. Negative thoughts annihilate.”

Villegas, who’s turning 103 on 15 May, is one of 44 centenarians that live on the Nicoya peninsula in north-western Costa Rica, an area dotted with wildlife refuges surrounded by some of Costa Rica’s most pristine and isolated beaches. While tourists, surfers and celebrities like Tom Brady and Gisele Bündchen frequent the coast, the interior is cowboy country. Motorcycles are the easiest way to get around on the rocky dirt roads, and, if you don’t have an all-wheel-drive car, horses are a close second.

The peninsula, which has vast tracts of hilly land with grazing cattle separated by barbed-wire fences, is also one of six ‘Blue Zones’ around the world, or places with higher-than-average life expectancies. In Nicoya’s case, the proportion of centenarians is around three and a half times the global average. According to explorer and author Dan Buettner, who coined the term in 2005, a number of factors in each zone – such as diet and community – contribute to such high concentrations of longevity.

In Costa Rica, one of the concepts Buettner pointed to was ‘plan de vida’, or ‘life plan’. It’s a Central American raison d’etre – a positive reason to live that keeps senior citizens active. It’s similar to the Japanese concept of ‘ikigai’ or ‘reason for being’ that Buettner says contributes to similar longevity in the Japanese Blue Zone of Okinawa. 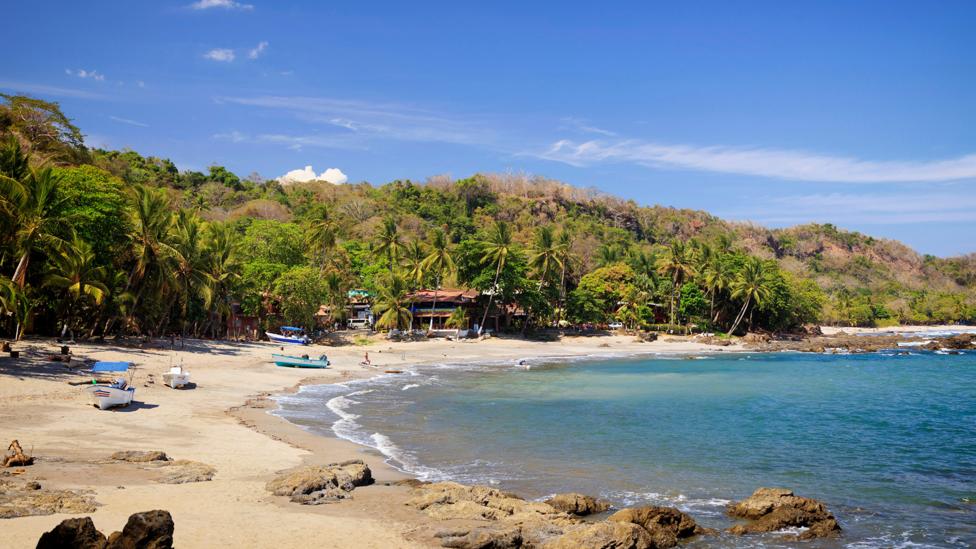 Nicoya Peninsula is home to beaches, horses – and an astoundingly high concentration of centenarians (Credit: Alamy)

The power of simplicity

While ikigai is a well-defined and studied concept that’s been around for decades, plan de vida is a more abstract concept in Costa Rica. It’s a term mostly used by researchers, but one embedded and unspoken in the Nicoyan way of life.

Simplicity is a key factor in the Plan de Vida, says Jorge Vindas, the founder of the Nicoya Blue Zone Association, who’s been studying centenarians in Costa Rica for more than 15 years. So is a positive outlook, Vindas adds, the goal isn’t to reach a certain age, but to find ways to enjoy tomorrow.

“If they plant an orange tree at 90 they plan on eating the fruit,” Vindas said.

For many centenarians the organisation tracks, their daily goals are as pure as going for a walk to visit family, taking care of their crops or, in Villegas’s case, riding a horse.

For many centenarians the organisation tracks, their daily goals are as pure as going for a walk to visit family, taking care of their crops or, in Villegas’s case, riding a horse

Villegas spent most of his life working on horseback as a farmer. He grew rice, beans and plantains for subsistence, and raised livestock for sale. As he got older, he noticed he couldn’t keep up with his workload and retired at 95 – an amazing 30 years after the standard retirement age in Costa Rica.

With no work, Villegas still saddled up every day and visited friends that were sick or in poor health. He wanted to cheer them up – and, of course, ride his beloved horse. Villegas isn’t the only elderly member of the horse-and-rider duo; his horse, Corazon, is 28 – the equivalent of an octogenarian in equine years. 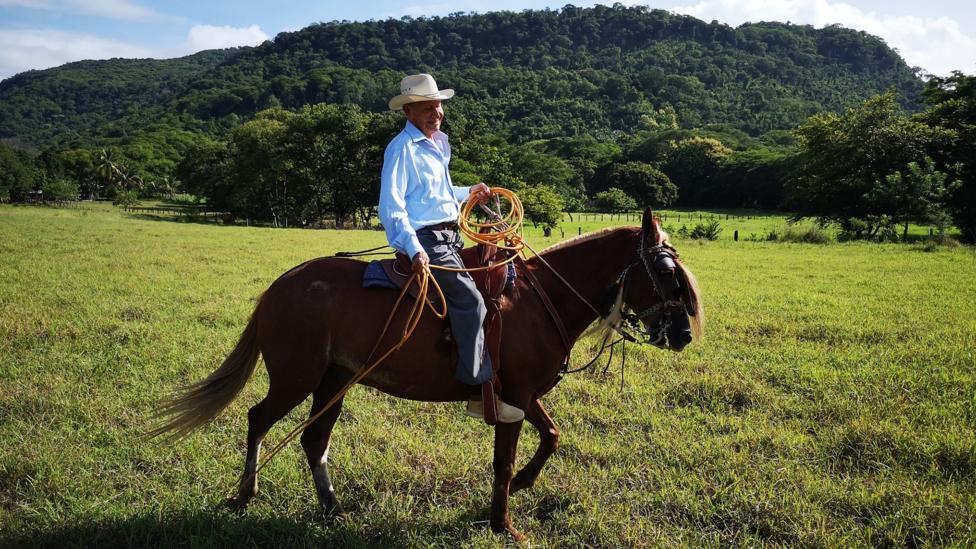 The simplicity at the heart of the plan de vida may even be why Corazon has fit seamlessly into this Blue Zone; Villegas says his horse has lived so long because he’s not a work horse and has a fairly easy life.

As for himself, Villegas isn’t sure why he’s lived for more than a century. Maybe it’s also an uncomplicated answer. “God’s the one that decides,” says Villegas.

Many of the longest-living residents of the Nicoyan peninsula don’t think they’re doing anything different or special than anyone else to live long lives. Some, like Villegas, say it’s the will of a higher power. But a secret may also lie in another kind of faith – one of living with purpose to serve family and community.

Vindas says most centenarians in the region live with family, and are respected as sources of wisdom and experience, which only blossoms throughout their long lives. As residents age, many have a heightened sense of purpose – they find their motivation in providing for their families, and teaching them the skills they’ve learned so they can keep the Nicoyan way of life going for generations to come.???? “The lifestyle is very simple,” Vindas says. “ I think the real road to longevity is around there, the simple life. They have less worries, their priority and source of happiness is family.”

Most of the centenarians in the region live below the poverty line, Vindas adds, but as long as they have a house and food for their family, they have enough. When they do have more, they share.

“If they kill a pig or have a big harvest, they’ll share it with their neighbors because it was too much for them,” Vindas says.

Although 89-year-old Ramiro Guadamuz isn’t quite yet 100, he is gripped by the same sense of faith and duty that’s pushing him toward many years to come. He still wakes up at 05:00 to milk cows on his farm, and works until sunset. Guadamuz says he still enjoys working, but teaching his great grandchildren, aged 15 and eight, how to work on the farm is what motivates him to keep going. 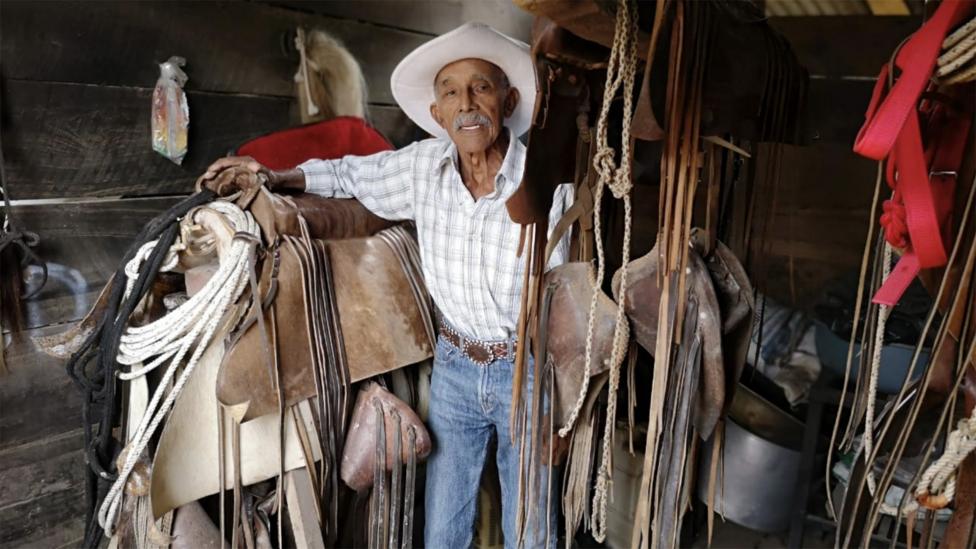 Ramiro Guadamuz is almost 90. Living long hasn’t been a goal of his – just a side effect of being happy with his lot (Credit: Ramiro Guadamuz)

“They come with me to milk in the morning and then we go check the cattle,” says Guadamuz. “I like teaching them those things and feel content when they come with me."

Guadamuz adds that he’s worked since he was a kid and has learned how to do everything there is to do on the farm. He’s worried that newer generations are too focused on technology and will forget the Nicoyan style of living that’s helped him live a long life.

“You want what’s best for your family, for them to live a good life,” Guadamuz says. “I hope that they live to 100, too.”

It just may be that one of the keys to thriving into old age is a spirit that only grows as time ticks by – although the peninsula’s elders simply see their day-to-day as the only way to live. “The concept of ‘plan de vida’ is a little romantic and not necessarily a term the centenarians use,” says Vindas. “They don’t think about dying – they think about what things they’re going to do tomorrow. That’s their plan de vida.”

Living for the future

It’s never been the goal to live as long as possible, say both Villegas and Guadamuz. It’s just been a lovely side effect of a fulfilling life in the sunshine. Instead, each has been focused on the simple pleasures of what drives them daily – building something their descendants can hold onto and keep building on when they’ve passed.

Guadamuz said he never thought he’d make it to his current age, and although he’d like to make it 100, he’s not living for the number. And Villegas, who’s looking forward to toasting 103 in a few weeks with some beers, has no target age he wants to reach, either. “I just hope I live more,” he says. Simply, they still have reason to live each day.

“Why want more than what God gave you?” adds Guadamuz. “What I have is enough… I’m happy because my family is united. My daughter and granddaughter love me a lot. The kids love me. Maybe that’s why I’m happy with my life. I feel ‘pura vida’.”